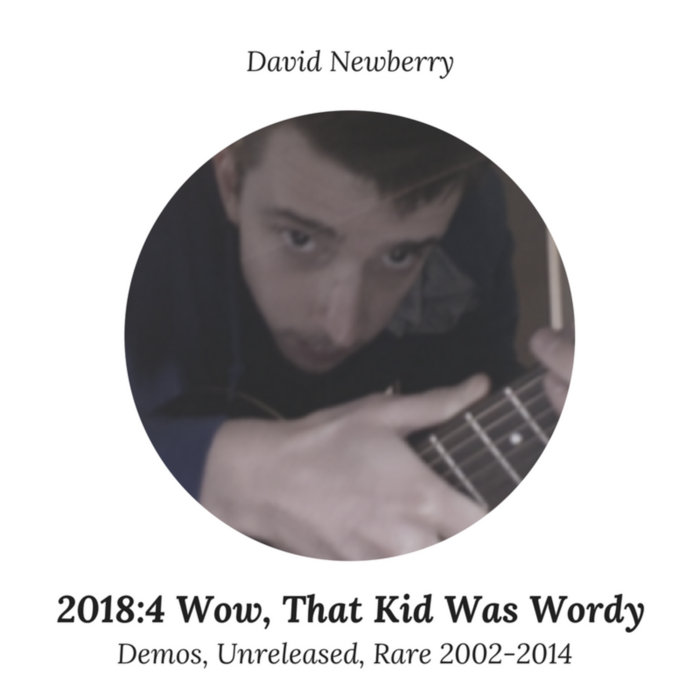 I created this song for a thing called “The Acoustic Guitar Project,” in which one guitar is passed around a city for different musicians to write and record a song on. At the end, everyone gets together for a concert to play their tune. I had one afternoon to complete my portion of the challenge, and this is what happened. What you’re hearing is literally a recording of the first time the song was ever played. It became the title track of the record I released the following year.

I had such a good time making 2012’s “No One Will Remember You” with Adam Iredale-Gray that I decided to give it another go. I hired a different band (Peter Mynett on bass, Ben Kelly on drums, David Simard on electric guitar) and we headed over to Mayne Island. We recorded this demo, and promptly all came down with Norwalk, threw up for two days, and went home. This song also ended up on 2015’s “Replacement Things.”

In 2009, I won a 'battle of the songwriters' that gave me a gift certificate to record in North Vancouver. It was a beautiful studio, but I had a hard time convincing the engineer not to 'pitch correct' me. He also didn't like my piano playing and wanted to replace it with his. (I said no, perhaps I shouldn’t have). Inspired by his desire to make me sound 'pretty', I took the tracks home and added the ugliest sounds I could think of. Tagged onto the end is the starting snippet of a song that would become "We Reap What We Sow," and both songs ended up on 2010’s ”When We Learn The Things We Need To Learn."

I don’t remember much about this song other than I wrote and recorded it at Winston Hauschild’s house on Bowen Island.

Recorded live at C'est What in Toronto with my first band, the Charismatic Megafauna. I had just made the band sing a barbershop quartet-style song with me, which they hated doing. To make it up to them, I agreed to play some punk rock. I believe this is the only recording of this song, which we played for years.

Recorded in Peterborough during an aborted attempt at a second Megafauna record (Pax Megafauna, it would have been called), this song tells the story of a trip I took to San Francisco with some strangers who became very close friends. Adam Iredale-Gray joins us on fiddle.

This comes from the Charismatic Megafauna self-titled (and only) album that was released in 2007 or so. We recorded it at bass player Matt's house (or was it drummer Brendan’s?) during Trent University’s exam time. His roommates were not impressed. There are 500 of these albums somewhere in circulation, some of them in home-made white cardboard envelopes, decorated with spray-paint and stamps. I wrote this song for a friend who was ill.

This goes back to 2002 or so, and is from an album called "Songs About Cutting Your Hand On A Table Saw." It was the very first recording I ever did, on a little Tascam 4-Track in Sutton, Ontario at a place called Y.O. Media. I played the drums (poorly) as well guitar, and bass, and studio owner Tim Kingston played piano. I think I thought it was a protest song. The fade-out-fade-in was a decision made in mixing after we realized many of the tracks 'clipped' during that part, and we didn't have time to re-record before the album release party. We liked how it turned out and kept it this way.

I was lying on a beach in Victoria when a military fighter jet flew low over the shore line. The noise was deafening. The planes were flying in a part of a 'farewell' ceremony/celebration that was sending some young Canadian's to Afghanistan to fight in a dubious war. It struck me as funny (and terrifying) that a machine designed to kill people was being used to celebrate anything at all. It struck me as less funny that we were celebrating. 158 Canadian soldiers died in that war. 119 were of Junior Ranks. Zero were Generals. Civilian death estimates hover around 31 thousand. Adam Iredale-Gray again joins us on fiddle.

This was recorded in Wells, BC in 2005 for a co-released album I made with James Burrows called "Burrows and Newberry Hate Each Other.” We made a 19 song album on a Mac mini with Garageband, one patch cord, and one SM-57 mic.

I stole the chords for this song from Bob Dylan, and recorded it in my basement suite in Victoria around 2008. The song started like this, and slowly, eventually became a song called "All of My Friends Are Famous," which ended up on my 2009 record "We When Learn The Things We Need To Learn.” Listening back, I cannot recall what inspired me to change it.

Another track written at Winston Hauschild’s house. What can I say. A significantly re-imagined version of this song ended up on “Replacement Things” the following year.

The first ever recording of the Charismatic Megafauna in existence, I think. I wanted to be a country rocker real bad. I wasn’t cut out for it.

When computer recording was a new thing, my hometown friend Benjamin Tiesma and I would record and trade songs frequently. He would often hassle me (via ICQ) for having no new material, so I made this to get him to lay off. I hadn't listened to it since I recorded it, and forgot it existed until right now. I like that my terrible gear/terrible recording techniques make is sound like an old vinyl record.

This was an internet choir that closed out the Charismatic Megafauna record.

Ashia Karana guests plus jams from across the globe from IAMDDB to Mndsgn and more.